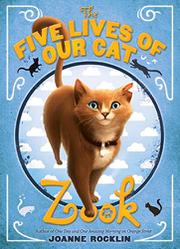 THE FIVE LIVES OF OUR CAT ZOOK

All cats have nine lives, especially those with 26 toes, right?

That’s what 10-year-old Oona tells her 5-year-old brother about their rescued cat. They found Zook, named for fried zucchini, in the alley behind their apartment. Zook becomes the pivot for the plot when his kidneys fail and he needs daily infusions. Enter Dylan, a guitar-playing nurse, charms Oona’s single mother and brother Fred, but Oona is convinced he’s the VILLAIN who shot Zook with BBs several years ago. Oona has a penchant for telling whoppers, like her dead father, but hers are colored-coded (blue, black, red, white and yellow) depending on need and purpose. In her engaging narration, she capitalizes important words, teaches Fred to read with rebuses and tells him stories (again, like her father) about Zook’s previous lives. With THEORIES to fit all circumstances, Oona’s character is a combination of Harriet the Spy in curiosity and Anastasia in spunk. As in Rocklin’s previous One Day and One Amazing Morning on Orange Street (2011), the spirit of a diverse and multicultural community plays a key role. In an achingly honest resolution, Oona recognizes that, unlike stories, real life has both unhappy and happy endings.

THIS BOOK IS HAUNTED
by Joanne Rocklin
Children

FOR YOUR EYES ONLY!
by Joanne Rocklin

CAT IN THE CITY
by Julie Salamon
Newsletter sign-up