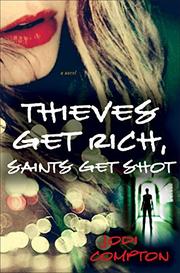 THIEVES GET RICH, SAINTS GET SHOT

This time out, Hailey Cain—the woman who doesn’t know fear because, well, she can’t—finds herself framed and on the run.

Hailey, 24, has a brain tumor. It’s degenerative, inoperable and will kill her before she’s 30, doctors have told her. Can there possibly be an upside to this Job-like litany? Yes, in a way, though it zig-zags. The fact is Hailey’s been rendered fearless. Symptom-free otherwise, it’s in the pathology of her rare and terrible disease that she is, as she puts it, “simply never afraid.” An enviable thing, some might say, except that it got her tossed out of the United States Military Academy, where in her fourth year she’d stood close to the top of her class. Understandably, West Point brass viewed with alarm the idea of a commander whose need for caution as a tactical element is nonexistent. So there’s unhappy Hailey with a barracks bag full of sharply honed military skills and no place to use them. Enter cherished high-school friend Serena, who happens also to be chieftain of a major L.A. street gang; somehow, it seems in the natural order of things for Hailey to become her second in command. But now, suddenly, up north in San Francisco another Hailey flashes, fake of course, engaged in behavior that could have truly unpleasant consequences for the real one. Spurious Hailey is wanted in a double homicide: an heiress and a cop, too, which goes to the heart of why the SFPD is hell-bent on bringing her to justice. But where is she? And perhaps even more to the point as far as Hailey is concerned, who is she?

Addictive. Though Compton (Hailey’s War, 2010, etc.) veers closer here than a good writer should to a kind of Rambo-ized chick lit, Hailey’s comet continues to shine.

THE 37TH HOUR
by Jodi Compton