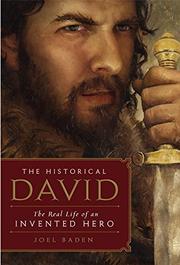 Following the lead of other scholars seeking to recreate history as portrayed in the Bible, Baden (Old Testament/Yale Divinity School; The Promise to the Patriarchs, 2013, etc.) sets out to thoroughly upend the story of King David.

The author asserts that the entirety of the biblical account about David was written for the sole purpose of legitimizing and glorifying a man who was, in fact, a thug, murderer and usurper. Baden begins by rejecting fundamental tales about David’s youth—e.g., that he played music for King Saul, slew Goliath and was anointed by the Prophet Samuel. He then theorizes that David was a minor officer in Saul’s army who decided to overthrow the king, a coup that completely failed. Forced to live on the run, David nonetheless managed to gain a following and become a leader of the opposing Philistines, eventually bringing about Saul’s downfall. Baden portrays David as ruthless and cunning, willing to kill anyone who got in his way, his own children included. As a final twist to the story, the author declares the story of David and Bathsheba, as it has been known for centuries, to be almost entirely fictional. He declares that Solomon was not David’s son and in fact took the kingship from David against his will as David was dying. Solomon’s own partisans made up the lurid story of David and Bathsheba to make Solomon appear to be a legitimate king by birth. Though certain theories, taken individually, have credence, Baden’s front-to-back rewriting of David’s life as a lurid soap opera will leave many readers mystified. Baden views the Bible as one rambling piece of propaganda: “Not a word of the David story—and perhaps the entire Bible—is intended solely to describe things as they truly were.” Baden ensures readers will see things his way by declaring anything that refutes his thesis to be “unverifiable.” And, no surprise, there’s a lot of that.

This unflattering portrait of King David is a hard pill to swallow.

THE BIBLE
by Karen Armstrong
Nonfiction

IN THE FOOTSTEPS OF KING DAVID
by Yosef Garfinkel
Indie

BEYOND THE DIVIDE
by J.P. Kenna
Nonfiction