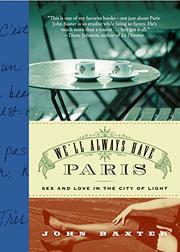 Sex and Love in the City of Light
by John Baxter
BUY NOW FROM
AMAZON
BARNES & NOBLE
GET WEEKLY BOOK RECOMMENDATIONS:

Sparkling dispatches about Parisian culture and history from an Australian biographer and film critic who is a longtime City of Light resident.

“All Paris stories are to some extent stories of love,” writes Baxter (A Pound of Paper, 2003, etc.), who combines chapters featuring the city’s golden modern age (the 1920s and ’30s) with material about his permanent move to Paris in 1990 with wife-to-be Marie-Dominique. Twenty-seven brief chapters chart his diverse, erratic interests and the progression of his deepening love affair with the city. In the ’60s, “French” meant “sexy” to the youthful author, as he recalls in “Why Paris?” By 1969, he had sailed for Europe, turning his back on the modest Australian success of his film After Proust because, he jokes, “I just couldn’t bear listening one more time to someone pronounce ‘Proust’ as ‘Prowst.’ ” Living in France, he learned how to drink and eat, or at least how to order in style (“The Food of Love”). But sex occupies more of the text than cuisine, beginning with “The Market in Meat,” which notes that brothels and the gratification of curious fetishes became an important attraction of Paris during the modern era, then lists some of the more infamous clubs that catered to “special tastes.” French voyeurism is the subject of “The Sexual Restaurant,” and “Sacred Monsters” provides a loose-rolling overview of the sexual revolution sparked by the 1959 publication of the erotic paperback Emmanuelle. Baxter’s acquaintance with an American expatriate writer he calls Hugo (“The Man Who Knew”) allowed him access to thrilling archives and personalities that unlocked the city of vice. Meanwhile, Marie-Do got pregnant and gave birth; the couple acquired a family dwelling in the provinces; and the author could finally call his adoptive country home.

A YEAR IN PARIS
by John Baxter
Nonfiction

PARIS AT THE END OF THE WORLD
by John Baxter
Nonfiction

THE MOST BEAUTIFUL WALK IN THE WORLD
by John Baxter

HOW THE FRENCH INVENTED LOVE
by Marilyn Yalom
Nonfiction

IN THE CITY OF BIKES
by Pete Jordan
Nonfiction

PARIS TO THE PAST
by Ina Caro
Newsletter sign-up