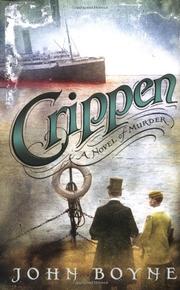 Boyne’s coarsely textured Edwardian page-turner teems with characters but reduces them to cartoonish dimensions. Crippen himself, American and mousey but with a fascination for dissection, emerges as the frustrated product of various pushy women, starting with his mother, whose religious obsession denied him the medical education he craved. After his first wife’s death in a traffic accident, he takes up with a music-hall singer named Cora, who turns out to be as overbearing as his parent. Crippen’s historical reputation was informed by not only Cora’s murder and dismemberment in London but his flight back to North America aboard the SS Montrose, accompanied by his lover Ethel Le Neve. From these events Boyne plaits a triple-strand narrative that loops around in time, effectively leeching suspense from the murder. Instead, the novel’s central focus falls on shipboard events, as suspicions mount regarding the identity of a certain John Robinson (Crippen, who shaved off his moustache) and his “son” Edmund, in fact Ethel in a suit and wig, setting aflutter the heart and possibly the latent lesbianism of another young passenger. A snobby matron (one of many in the story), a stiff captain, a brutish youth and other caricatures spend the 14-day voyage gossiping, leering and bristling. The captain, however, seeing through Edmund’s disguise, famously takes advantage of the new-fangled Marconi Telegraph equipment onboard the ship to communicate his suspicions to the police. The plodding Inspector Dew races aboard another vessel to overtake the ship, and both Crippen and Le Neve are arrested off the coast of Canada. Boyne’s light tone diffuses any seriousness and his late and highly improbable twist to the murder scenario transforms the story, already damaged by its loose attention to period style, into something resembling farce.

A LADDER TO THE SKY
by John Boyne
Fiction

A HISTORY OF LONELINESS
by John Boyne
Fiction

THIS HOUSE IS HAUNTED
by John Boyne
Fiction

THE HOUSE OF SPECIAL PURPOSE
by John Boyne
Fiction