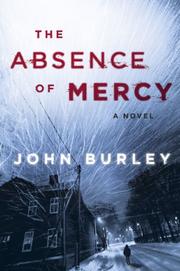 THE ABSENCE OF MERCY

Abandoned in the woods, the first victim is a local high school student, a 15-year-old boy. The brutality of his death contrasts with the precision of the blows, head wounds accurately driven into the weak points of the human skull. It appears this is not the murderer’s first execution.

This serial killer lurks in the idyllic town of Wintersville, just miles from the Ohio River. He savages his victims with not only a long, tapered, mysterious instrument, but also his teeth, ripping flesh, shredding blood vessels, amputating fingers. Medical examiner Ben Stevenson methodically catalogs the wounds, recording each laceration and avulsion with clinical objectivity. Simultaneously, Stevenson wants to protect his family and his young assistant, Nat, from the horror, but no one is safe from a murderer who strikes in broad daylight. The case weighs upon Ben, straining his relationship with his wife, Susan, a family practitioner, and their two sons, 16-year-old Thomas and 8-year-old Joel. His fears prompt nightmares of close calls with his own sons—a clown that menaced Thomas, an accidental fall that left Joel comatose. Hopes rise when a victim is found alive, barely clinging to life. Although Monica Dressler replays much of her ordeal in her dreams, she unfortunately recalls little of her assailant. As Thomas helps Monica recover and Susan becomes increasingly anxious, Ben works with law enforcement to piece together the evidence. Using his experience as an emergency room physician, Burley skillfully uses the step-by-step discovery of evidence to ratchet up the tension in his debut novel. Tool markings on the victims’ bones, DNA evidence collected from their skin and even unusual dental impressions lifted from their wounds add up. Soon, Ben can no longer deny that the evidence points much too close to home.

A smart, disturbing and heartbreaking thriller.

THE SURGEON
by Tess Gerritsen
Mystery

THE LIFE I LEFT BEHIND
by Colette McBeth
Indie