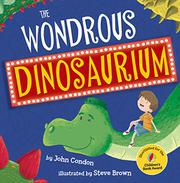 Yet another child learns that dinosaurs make exciting, if chancy, pets.

On the prowl for a pet, Danny walks past shop windows displaying puppies and kittens to enter the titular storefront…where “Mr. Ree, purveyor of prehistoric pets,” offers him any dino he might desire. Unfortunately his first pick, Diplodocus longus, eats half a ton of veggies per day; his second, Tyrannosaurus rex (“Ooh, brave choice”), is too, well, “drooly”; and later ones—unnamed but brightly patterned, smiling, and recognizably depicted in Brown’s cartoon scenes—prove likewise impractical or unsatisfactory. (Confirmed dinophiles might be able to tag the unidentified beasts, but there is no key for paleontological newbies.) Condon works the well-worn premise to a happy resolution, as the pet Danny finally brings home in a box turns out to be not an ordinary tortoise, as his mother thinks at first sight, but a spiky-tailed, tortoiselike Meiolania from the Middle Miocene, small enough to pick up…at first, anyway. Aside from a background figure in one scene, the human cast is uniformly white. José Carlos Andrés and Ana Sanfelippo’s Adopting a Dinosaur (2019), Jason Cockcroft’s How To Take Care of Your Dinosaur (2019), and Diego Vaisberg’s Dino (2018) are but three recent examples of the superior treatments available.