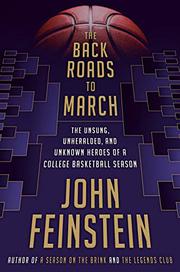 THE BACK ROADS TO MARCH

A rousing account of the 2018-2019 college basketball season, a time of surprises and rising stars.

Longtime Washington Post sportswriter Feinstein, author of such sports classics as A Season on the Brink and A Good Walk Spoiled, comes by his indefatigable love of basketball honestly: In the late 1960s, his father took him to NIT championship games at Madison Square Garden, seated a few yards from the boards. “There were no Spike Lee seats in those days,” he writes, gamely, “so this was about as good as it got.” The author is a sympathetic observer, fan, reporter, and scholar all at once, and he delivers reams of information about how the game has evolved in the decades since his childhood. Today, he notes, there are more than 350 teams in Division 1 college basketball, with the first game of the season involving more action than any one person could ever hope to comprehend, all on the path to “March madness.” The best parts of this book focus on the people who are involved in shaping the young players, such as the fellow who “gave up an $800,000-a-year job as a lawyer and CEO to become an assistant basketball coach for $32,000 a year—and couldn’t be happier.” Among Feinstein’s other subjects—notwithstanding such giants as Mike Krzyzewski, Tom Izzo, and Jim Calhoun—are coaches from historically black institutions, schools that are well represented throughout the season at every level of play; an episode involving a game between Howard and Harvard reveals coaching worthy of a championship NBA team. The narrative closes steadily in on victory by a school that had never enjoyed a national championship (Virginia) and the defeat of Feinstein’s alma mater: “I watched the Duke kids—and they were kids—heads down, tears of shock in their eyes, after the final buzzer on the last day of March and felt badly for them. But, being honest, not that badly.”

Feinstein writes with warmth and enthusiasm of a beloved sport in a book that will grab any fan.

WHERE NOBODY KNOWS YOUR NAME
by John Feinstein
Nonfiction

ONE ON ONE
by John Feinstein
Nonfiction