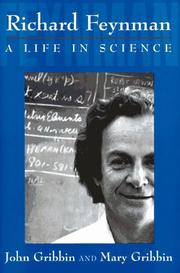 Another Feynman biography? Yes, and why not: Feynman may just be the most idiosyncratic, brilliant scientist America has ever produced, a man who enjoyed stage managing his public persona. The Gribbins, veteran popular-science writers (Fire on Earth: Doomsday, Dinosaurs, and Humankind, 1996), fall short of outright hagiography, but they make it clear that Feynman was "no ordinary genius." The most original contribution in their take on Feynman's life is in conveying the shape of the physicist's mind: From boyhood on, he truly had to do it himself--go back to first principles and prove theorems or demonstrate physical laws to be entirely convinced of their truth. If experiment did not bear out theory, then theory was out. Especially intriguing were his visualizations of particle interactions. These mental pictures led to the famous Feynman diagrams that have eased the study of quantum mechanics for several generations of physics students. Feynman's Nobel Prize was for his work in quantum electrodynamics, that is, for formulations of the equations that explain all interactions between light and matter. For the cognoscenti, Feynman's formulation gives rise to the notion of electron self-interaction involving the creation of "virtual" photons; this was key, the Gribbins aver, to setting the stage for the revolutionary Big Bang theory of the creation of the universe. The book unfolds in a series of chapters interweaving a narrative of the life (boyhood, university, the marriages, Los Alamos, Cornell, Caltech, etc.) with the hard stuff--the Ph.D. thesis, the Nobel work, and beyond. Readers may be advised to follow Feynman's own advice to his sister: Read until you don't understand, and then go back and reread until you do. If that fails, there is still plenty of human interest, humor, and even acknowledgment of failings here (Feynman thought English and philosophy were "dippy"). Flaws, yes, but still a fine diamond of a life, well polished by the Gribbin team.

OUT OF THE SHADOW OF A GIANT
by John Gribbin
Nonfiction

ALONE IN THE UNIVERSE
by John Gribbin
Nonfiction