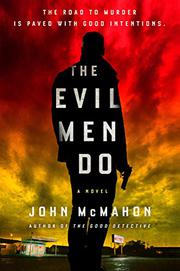 THE EVIL MEN DO

Having survived his tempestuous debut, P.T. Marsh, of Georgia's Mason Falls Police Department, is back for more—including some residue from that first case that just won’t go away.

Dispatched like an errand boy to wealthy real estate mogul Ennis Fultz’s home to find out why he hasn’t joined his bridge buddies, Mayor Stems and interim police chief Jeff Pernacek, for their monthly game, Marsh and his partner, Remy Morgan, find Fultz dead in his bed. It turns out that his passing, devoutly longed for by so many of the people he’d crushed or outwitted on his way to the top, was helped along by the strategic dose of nitrogen somebody substituted for the oxygen he inhaled regularly, especially when he was expecting particular demands on his virility. Marsh and Morgan quickly focus on two candidates who might have made those demands: Suzy Kang, a recent visitor who was so eager to cover any traces that she’d been to Fultz’s house that she sold the car she’d driven there, and Connie Fultz, the victim’s ex-wife and perhaps his current lover, who acidly swats them away and tells them: “Look for some little gal who’s into bondage.” McMahon excels in sweating the procedural details of the investigation, which take the partners from a search for Suzy Kang and that missing car to a not-so-accidental car crash that’s evidently targeted a young girl who has no idea she’s implicated in the case. But he’s set his sights higher, taking in everything from a civil suit the relatives of the perp Marsh shot in The Good Detective (2019) have launched against him to a possible conspiracy behind the deaths of his deeply grieved wife and son, all of it larded with Georgia attitude and truisms, a few of which rise to eloquence (“I wasn’t good at faith. I was good at proof”).

As tangled and turbulent as the hero’s nightmares, and that’s saying quite a bit.