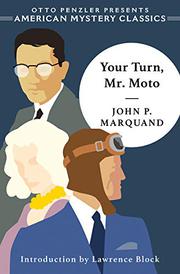 A reprint of the novel that launched the Japanese agent Mr. Moto, originally published under the title No Hero in 1935.

The earlier title is not only more epigrammatic, but more precise, since the book's narrator and protagonist, Kenneth C. Lee, the flier who served during the Great War and then became a stunt pilot, is certainly not a hero. When the tobacco company funding his experimental trans-Pacific flight from Japan to the U.S. suddenly changes its mind, Casey, stranded in Tokyo, drunkenly curses the company and his nation in front of an audience of barflies, rips his passport in half in front of Cmdr. James Driscoll of Naval Intelligence, and suddenly finds himself alone. While he’s at his most vulnerable, he’s taken under the wings of the mysterious Mr. Moto, the questionable scion of Japanese nobility, and Sonya Karaloff, a Russian spy. The two of them press him into a shadowy scheme that quickly endangers his life when he finds a corpse in the stateroom that’s been booked for him on a ship bound for China and then realizes that well-connected Shanghai merchant Wu Lai-fu is certain that Casey knows something he absolutely doesn’t know: the location and contents of a secret message vitally important to the world’s naval forces. Lawrence Block’s chatty introduction aptly observes that Marquand developed Mr. Moto as a replacement for Charlie Chan after the death of Chan’s creator, Earl Derr Biggers, but doesn’t go on to note that the shadowy Mr. Moto, who plays only a supporting role here, couldn’t be more different from the cheerfully domesticated Chan, or the cloak-and-dagger intrigue that surrounds him from the world of Chan’s placid Honolulu.

Elementary, badly dated international intrigue starring an impossibly naïve hero who needs all the help he can get.