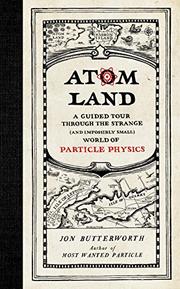 Exploring the world of particle physics, “a new territory on the edge of physical knowledge.”

Every educated person should have a passing knowledge of the microworld, but since atoms and other pieces of the puzzle obey the laws of quantum mechanics, which many physicists say make no sense, this requires formidable pedagogy. Thankfully, in recent years, a steady stream of writers has accepted the job. The latest is Butterworth (Physics and Astronomy/Univ. College, London; Most Wanted Particle: The Inside Story of the Hunt for the Higgs, the Heart of the Future of Physics, 2015, etc.), a leading physicist working on the Large Hadron Collider. Of four approaches to explaining the inexplicable, the author makes modest use of the first three—straightforward, historical, comical, but he emphasizes the last: allegorical. Readers with a tolerance for whimsy will be entertained and learn the quantum basics, if not the subtleties. Eschewing the usual metaphor, Butterworth creates a literal quantum world. Readers board his symbolic boat at the western, human-scale edge of the map. Sailing eastward over the sea—i.e., the quantum field—the world shrinks as the vessel reaches an archipelago named for quantum features, from the westernmost Atom Land to less familiar isles of leptons, hadrons, and quarks to distant Bosonia. Although parts remain impenetrable jungle and roadless wilderness, readers explore the cities (representing the particles), transportation infrastructure (the forces), and laws, which are obeyed only on average. Further east lie unexplored, dangerous, and possibly mythical lands of dark energy, supersymmetry, extra dimensions, and quantum gravity. Inevitably, in an allegory, the easy analogies (protons, electrons, gravity, electromagnetism) come across. Confronted with areas that trouble even graduate students—e.g., the weak force, chirality, the Higgs field—readers may give up, relax, and enjoy the fable.

A noble and sometimes successful effort to demystify quantum physics.