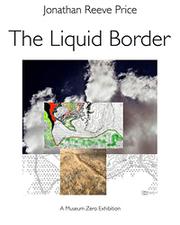 Price’s new poetry collection centers on the nature of borders.

How do you cut a river in half? You can’t, of course—which makes the paradox of the Rio Grande even more painful in Price’s thoughtful, poignant new book of poetry and digital art. The poet refers to that river, which makes up much of the physical border between the United States and its southern neighbor: “Throughout most of the river’s run to the Gulf of Mexico,” Price writes, “the border is in the middle of the flow, invisible, but real.” That border has become a source of significant international conflict in the modern era, as immigrants hoping to cross it have run up against the will—and in a few places, the wall—of a presidential administration intent on keeping them out. Price’s volume seeks to map that liminal space in imagery and verse. Roughly half the book is given over to digital images; in them, the artist stitches together cartographs, photographs, and satellite images, many of them altered, to evoke the strange space between the two countries. Price calls these pieces “imaginary” maps and argues that they document “something close to reality, but not all there.” Accompanying the visuals are roughly a dozen thoughtful, poignant poems, many of which capture the torturous experience of those seeking entry into America. For instance, one of the later entries opens, “Wet and cold we crossed the island to the deeper river, / stepped in, and, the guides told us, passed the invisible border, / but all we saw was clouds and those cliffs, so tall, / steep, and slippery, rocks sliding down, / shoving us back down, clambering back up. / How hard our first steps into America were, / how uncertain.” Price is as adept with his poetry as he is with his pictures, and the combination is a moving testimony to the struggle of those who yearn for a better life elsewhere.

A mournful, beautiful, and original synthesis of word and image.