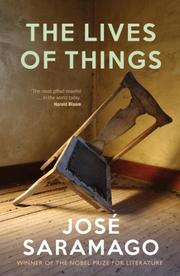 THE LIVES OF THINGS

This slim collection of early, experimental stories represents a footnote on the career of the Nobel Prize–winning novelist, who died in 2010.

Originally published as a collection in 1978, these stories reflect the social conscience and penchant for elaborate allegory that would flourish in his celebrated novels, such as Blindness (1998). In the introduction, translator Giovanni Pontiero (who died in 1996) explains that half of the stories “might be described as political allegories evoking the horror and repression which paralysed Portugal under the harsh regime of Salazar.” Since most American readers aren’t all that familiar with Portugal’s political situation of the 1960s, the opening “The Chair” might be particularly impenetrable without the brief context provided by the introduction, which alludes to “the dictator’s dramatic departure from the political scene on 6 September 1968, when the deckchair in which he was sitting collapsed and the shock precipitated a brain haemorrhage.” The story itself is oblique and matter of fact, minutely detailed, largely devoid of passion, punctuated by the exhortation, “Fall, old man, fall. See how your feet are higher than your head.” In the other stories as well, characters are unnamed, mainly described by their social positions, as the late author spins parables about an oil embargo that leaves a man all but imprisoned in his car (“Embargo”), a society in which things stop working (doors, watches, buildings, entire streets) and even disappear (“Things”) and the establishment of a cemetery that becomes “a city of the dead surrounded by four cities of living human beings” (“Reflux”). “The Centaur” reads most like a fable, yet it is also the most compelling story here, as the author shows the protagonist’s divided nature, referring to the mythical creature as both horse and man, who “had learned how to curb the animal’s impatience, sometimes opposing him with an upsurge of violence which clouded his thoughts or perhaps affected that part of his body where the orders coming from his brain clashed with the dark instincts nourished between his flanks.

Though some of the stories work well on their own, the collection will mainly interest those already very familiar with the author and his novels.

RAISED FROM THE GROUND
by José Saramago
Fiction

MANUAL OF PAINTING AND CALLIGRAPHY
by José Saramago
Fiction

DEATH WITH INTERRUPTIONS
by Jose Saramago