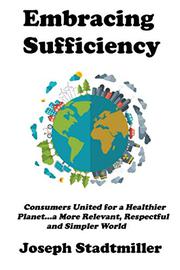 Stadtmiller (Those We Touch Along the Way, 2017, etc.) considers consumption from a historical perspective, tracing the usage of Earth’s resources from early humans through today. The first half of this illuminating work presents an abbreviated version of the salient points of human history, including the development of tools and weapons, the creation of clothing, the domestication of plants and animals, the exploration of the world, the use of various resources to generate power, the advent of the Industrial Revolution, and the rise of consumerism. The author summarizes key global occurrences of the millennia in largely readable prose, although some sections are dense and a bit too heavy on historical details. Stadtmiller’s engineering background contributes to technical but not uninteresting descriptions of such innovations as the internal combustion engine and manned flight while his overview of advertising, “a major force in many capitalist economies,” demonstrates a keen understanding of marketing techniques and media, in particular the emergence of television and the internet. The second half of the meticulously researched book concentrates more directly on consumption, broadly defined by the author to encompass the use of all of the planet’s resources, including fossil fuels, water, and food. Stadtmiller writes: “Consumption levels of the world’s wealthiest countries…are draining the remaining stockpiles of critical nonrenewable natural resources at untenable rates; the disparities of this consumption are glaring. Twenty percent of the population from the highest income countries consumes 86% of all private consumption.”

That startling statistic is but a single example of the compelling facts the author shares to dramatize the impact of modern consumption. Several chapters highlight some of humanity’s most egregious environmental abuses. “The Promise of Polymers,” for example, clearly discusses the relatively recent invention of plastics with particular attention to their toxicity. Stadtmiller knowledgeably writes about the shortcomings of the plastics recycling system and the bodily hazards of BPA. Another engaging chapter addresses the pros and cons of genetically modified organisms, particularly with respect to food production. One of the more eye-opening chapters delves into “Mount Waste-More,” the author’s clever name for the world’s trash crisis: “Globally, garbage waste is accumulating at 2.12 billion tons per year, 555 pounds of garbage each year per each global citizen.” On the positive side, he wisely observes that some American communities are adopting a “completely new concept of a world without garbage” called “Zero-Waste.” Also pertinent are the five profiles (Brazil, India, China, Russia, the United States) provided as examples of energy and environmental usage by individual countries. Stadtmiller’s lucid discussion of a “Nature-Conscious Consumer” reflects a sensible depiction of human accountability. With a rather remarkable eye for detail, he takes a broad view of human consumption, neatly dividing the topic into understandable segments while relating them to the whole. The author employs the occasional meaningful example for illustration and supports the text with a liberal use of carefully chosen statistics.

An impressive, impassioned call for fundamental change in the way humans interact with their world.