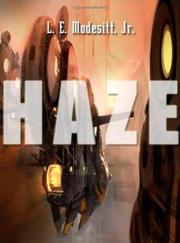 Major Keir Roget is a security agent for the Federation, a repressive, Chinese-dominated military empire that has ruled Earth and its colonized planets for more than a thousand years. His new assignment is to penetrate the veiling clouds of planet Haze, because his superiors suspect the presence of a dangerously subversive Thomist (skeptic) culture outside the Federation’s control. Battered by orbiting concentric spheres of defensive nanotech satellites, Roget’s boat barely survives the drop into a remote section of Haze. After hiking for two days, he’s met by Lyvia Rholyn, who tells him she’ll be his guide to Dubiety, as the locals call it. If what Roget sees and learns can be believed, the planet is a utopia that stresses ecological harmony, education and truth, and its science includes techniques that resemble time travel and teleportation. Lyvia hints that Thomists have colonized more than one world; moreover, this isn’t the first time the Federation has threatened Haze/Dubiety. Roget has good reason to distrust his Federation superiors. Alternating chapters relate an earlier mission to root out subversives in the dusty, energy-deprived Saint culture of Utah, during which time he not only discovered that the Saints were neither as primitive nor as innocuous as he had been told, but received a reminder of the values the Federation despises.