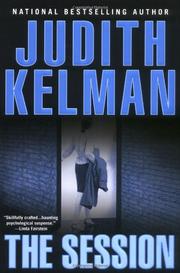 A polished, self-assured suspense novel by Kelman (Summer of Storms, 2001, etc.) features a likable Rikers Island psychologist who becomes entangled in the lives of her nutty patients.

Julia “P.J.” Lafferty, early-30s, divorced, New York Irish, and intractable, gets canned from her intense job counseling the women inmates at Rikers prison when one of her patients is inexplicably murdered during a mock wedding ceremony the psychologist failed to report to her superiors. Young Jeannie Bagshaw suffered a horrific history of abuse, first from her parents, then her sadistic husband, Charlie Booth, before she was incarcerated for acting out. P.J., brusquely sent packing by the prison’s Chief Daley and scrambling for work in private practice, can’t let the murder of innocent Jeannie rest, especially when another of her patients, delusional Big Millie, the self-appointed minister at the “wedding,” calls her with tips about Booth’s appearances at the prison. P.J. doggedly pursues leads wherever she can, by pestering her former husband Rafe, a rumpled, good-natured prosecutor, who evidently still cares for P.J.; her deaf twin sister, Caity Goldstein, an accomplished author whose meddlesome, critical manner only makes P.J. more determined; suspense novelist Albert Dunston, whose book about a sociopath killer fits the pattern of Booth’s evil behavior; and P.J.’s former boss at Rikers, Will Creighton, who pushes P.J. to seek professional counseling for the skeletons in her own closet. Indeed, while P.J. is attempting to heal riffs in her patients’ marriages, she is undergoing an unorthodox treatment of “psychokinetic intregration” from the sleek Dr. Groome in Tribeca, which reveals way more about her mother and unstable brother, Jack, than P.J. bargained for. Kelman is a pro at fitting the pieces of the murder together, and though the identity of the villain is never in doubt, the novel succeeds thanks largely to P.J.’s colloquial carnival roster.