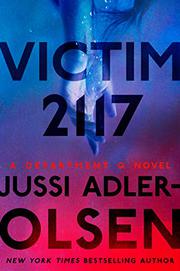 The eighth docket for Department Q, of the Copenhagen Police, links its most mysterious member to two culprits planning multiple murders.

When down-at-the-heels freelance reporter Joan Aiguader first gets a look at the 2117th refugee to die at the Barcelona shore while attempting to cross the Mediterranean, he’s inspired by the dead woman to put aside thoughts of his own suicide and cover her death. The story turns out to be much bigger than he thinks, for Victim 2117 has been stabbed to death, not drowned, and Joan’s laughably incomplete reportage gets him put under strict orders to dig up the rest of the story within two weeks. For Hafez el-Assad, of Department Q, Victim 2117 means much more. He recognizes her from Joan’s picture as Lely Kababi, the woman who sheltered his family years ago and became a second mother to them. Deeply shaken by her murder, Assad is finally moved to share with DI Carl Mørck, the head of Department Q, some crucial details about his past, from his links to Iraq’s notorious Abu Ghraib prison to his real name, Zaid al-Asadi, so that they can take steps against the plot Assad is certain is unfolding. For Abdul Azim, the terrorist now known as Ghaalib, Victim 2117 marks the first step in an epic plot of revenge against the West in general and Assad in particular. And for Alexander, an obsessive video game player, Victim 2117 is the trigger that informs him that once he’s claimed his 2117th victory in “Kill Sublime,” it’ll be time to murder his parents and then go out into the streets of Copenhagen and continue the carnage. Only a wizard could sustain all these plotlines and manage the shifting connections among them, and Adler-Olsen (The Scarred Woman, 2017, etc.) delivers inconsistently on their extravagant promise. But readers hooked by Assad’s fatal tango with Ghaalib or the news that Mørck, now 53, is about to become a father again will keep reading compulsively and do their best to shift gears with the grimly multifoliate story.

Adler-Olsen supplies everything you could possibly want from a thriller and much, much more.

THE PURITY OF VENGEANCE
by Jussi Adler-Olsen
Mystery

A CONSPIRACY OF FAITH
by Jussi Adler-Olsen
Newsletter sign-up