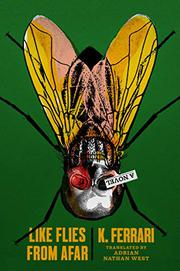 A darker shade of absurdist noir featuring an Argentine businessman, as contemptible as he is successful, who finds his life inexplicably falling apart.

The opening of this short novel finds Mr. Machi in the afterglow of a fellatio-induced, cocaine-driven orgasm, luxuriating in his obscenely opulent success, as he prepares to take a drive. “He doesn’t need to wonder what success is, because he can feel it in the potent purr of the accelerator beneath his right foot, in the cushioned upholstery, in the power steering, in the sunlight and the stares of astonishment and envy reflecting off the BMW’s gloss finish,” writes Ferrari, who works as a subway-station janitor in his native Buenos Aires after having been deported from the United States in the 1990s. This is his first work to be translated into English, and it could pass as a madcap mixture of Kafka, Bukowski, and Jim Thompson. In quick order, the corrupt, politically connected Mr. Machi finds his tire sabotaged and his trunk somehow occupied by a corpse whose face has been mutilated beyond recognition. Then more clues seem to link Mr. Machi himself to the murder. He has no idea who the victim is, who the perpetrator was, or why he has been targeted. The book follows his efforts over one day to dispose of the body and the evidence and to discover the motive and culprits. He “feels there’s no bottom to the pit he’s fallen into,” and his attempts to dig himself out find him falling deeper in. He believes he has no enemies, but as he ponders his predicament, it appears to the reader that pretty much everyone he knows could have wished him ill—his wife and their children, his employees and partners, his rivals. His daughter’s boyfriend is a writer who supports himself with menial work (like the author) and has plans to write a detective novel much like this one, in which Mr. Machi would be the protagonist “and terrible things would happen to him.”

Though ultimately unsatisfying as a mystery, it works as an existential parable, with a protagonist whose character is destiny.

A FATHER
by Sibylle Lacan
Fiction

MILENA, OR THE MOST BEAUTIFUL FEMUR IN THE WORLD
by Jorge Zepeda Patterson
Fiction

THE WEIGHT OF THINGS
by Marianne Fritz
Newsletter sign-up