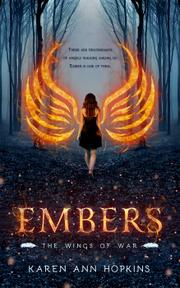 An impending apocalypse provides a compelling backdrop for romance in this page-turning first installment of a new YA series.
It’s almost the end of the world as we know it, and 17-year-old Ember Shay O’Meara feels fine. If anything, she feels a little too fine. A fiery car crash recently killed her parents but left her unscathed, without a single scar to show for it. Per her parents’ wishes, guardianship shifted to her family friend Ila, who lives in a small Tennessee town in the Smoky Mountains. There’s a reason Ila is in charge; it turns out that both she and Ember are Watchers: special, “half human” creatures descended from angels. Ember must learn everything she can about her kind from Ila, but her supernatural education doesn’t excuse her from having to attend high school. There, her good looks gain her the acceptance of the cool girls and the attention of the football team’s quarterback. However, Ember falls in love with a handsome, half-human “Demon” named Sawyer McCrae, who lives with other evil creatures in a high-walled compound in town. Sparks fly, sometimes quite literally, as Ember and Sawyer battle their impulses—and better judgment—to figure out whether they can be together. The question becomes more urgent as the apocalypse looms large in their future. Hopkins (Lamb to the Slaughter, 2014, etc.) expertly weaves her plotlines together in this compulsively readable teen romance. She peppers the novel with short passages from the Bible (including the book of Revelation) in order to craft a good-versus-evil morality tale writ large. For example, Sawyer, like others in his Demon group, must feed on human souls for sustenance, but he’s hesitant about it, especially after things turn more macabre and healthy humans, as opposed to infirm drifters, start getting killed. Such ethical issues are disquietingly uncomfortable and perhaps even beyond the scope of this story. Nevertheless, Hopkins delivers many successful elements of young-adult romance—appealing lead characters, high-voltage chemistry, repressed sexuality—which will win her ardent followers.
A paranormal YA tale that’s highly recommended for fans of the Twilight series; move over, Bella and Edward, there’s a new set of kids on the block.
Pub Date: Oct. 21st, 2014
Page count: 351pp
Publisher: CreateSpace
Program: Kirkus Indie
Review Posted Online: Dec. 1st, 2014
Kirkus Reviews Issue: Feb. 15th, 2015

THE 52ND
by Dela
Indie

Diamonds in the Sky
by M.A. Harper
Indie