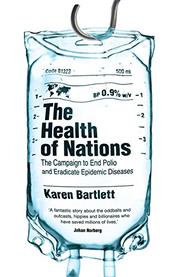 THE HEALTH OF NATIONS

Towards a World Without Contagious Disease
by Karen Bartlett
BUY NOW FROM
AMAZON
GET WEEKLY BOOK RECOMMENDATIONS:

Will the world ever be rid of infectious disease?

London-based journalist, filmmaker, and author Bartlett (Dusty: An Intimate Portrait of a Musical Legend, 2014, etc.) reviews attempts to conquer infections from the days of Edward Jenner and the advent of the germ theory of disease to current efforts to eradicate polio. The book’s structure is complicated and not chronological. The author begins with smallpox, explaining that the strategy leading to eradication called for “surveillance and containment.” Rather than massive vaccinations of populations, the idea was to identify a case and then vaccinate all the persons who had been in contact with the patient. She follows with a detailed account of the development of the Salk and Sabin polio vaccines and the current global effort at eradication, often stalled due to war, falsehoods, and politics. Sadly, in the film Zero Dark Thirty, the Pakistani doctor who collected blood samples for DNA to verify Osama bin Laden’s location for the CIA was wrongly identified as a polio vaccinator. That led to a Taliban ban on vaccination and the subsequent murders of polio vaccine volunteers. Bartlett also discusses the role of the Bill & Melinda Gates Foundation in the polio campaign and controversies in the global health community about how priorities should be set. Then she returns to history with a minireview of immunology science followed by chronicles of the wins and losses over the years in the battles against a variety of diseases. Bartlett also reviews in detail the long history of anti-vaccination campaigns, currently on the rise in America. The narrative can sometimes overwhelm with names, dates, places, bureaucratic agencies, and acronyms. Some individuals and programs are highly efficient and effective; some are hopelessly venal and corrupt. Still others, like the World Health Organization, she writes, are simply understaffed and underfunded.

Bartlett makes it abundantly clear that research to reduce the impact of infectious disease is progressing but that politics, budgetary constraints, competing priorities, and ego clashes are serious impediments.