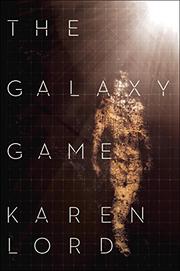 Although this is presented as a stand-alone novel, it really isn’t one; readers unfamiliar with Lord’s previous work may have a hard time following its many threads. The action takes place in a galactic system of four planets and their colonies. People from each planet specialize in a particular aspect of humanity: For those from Sadira, it’s the mind; from Ntshune, the heart; from Zhinu, the body; and from Terra, the spirit. Rafi Abowen Delarua, of Terran descent, is a student at the Lyceum, a sort of reform school established “to bring together all the rogue and random psi-gifted of Cygnus Beta and teach them ethics, restraint, and community.” Threatened with being “capped”—made to wear a mind-control device—he escapes to Punartam, one of the colonies, where he joins a team of Wallrunners. Wallrunning, this galaxy’s answer to football or Quidditch, plays an intricate and mysterious role in the galaxy’s complicated social, political and perhaps military arrangements. It may also be somehow related to the ability of those with psi gifts to operate the mysterious Sediri mindships, powerful living spacecraft reminiscent of whales. Rafi is allied with a powerful family on his home planet, but on Punartam, he finds himself drawn in many directions and must learn where his loyalties lie.

Lord is at her best describing vividly alien bioformed landscapes and exploring subtle differences among uneasily allied cultures. But this novel, with its tentacled narrative structure and many references to previous events, is not the best entry to her world.