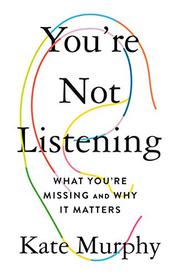 What You're Missing and Why It Matters
by Kate Murphy
BUY NOW FROM
AMAZON
BARNES & NOBLE
LOCAL BOOKSELLER
GET WEEKLY BOOK RECOMMENDATIONS:

A lively debut that asserts the power of closing our mouths and opening our ears.

Houston-based journalist Murphy delves into the academic research on listening, which tends to be scantier than that on its noisier cousin, talking, and chronicles her interviews with those whose work revolves around hearing and paying attention, including a priest, a bartender, and a CIA agent. The author suggests that what might seem at first to be a passive activity is in fact an active, demanding one and a skill that can be learned with practice. At the basis of listening, Murphy maintains, is a sharp curiosity and the kind of openness that indicates the hearer has something to learn from the speaker. The author recommends thinking of active listening as a form of meditation. During a conversation, “you make yourself aware of and acknowledge distractions, then return to focus. But instead of focusing on your breathing or an image, you return your attention to the speaker.” She points out that one of the primary obstacles to listening is the assumption that we know what someone is going to say, which means, unfortunately, that we're least likely to pay attention to the people closest to us, including spouses, children, and friends. In a chapter that is particularly helpful and relevant in our increasingly polarized world, Murphy offers suggestions on “Listening to Opposing Views,” including recognizing the rather remarkable fact that when people with “staunch political views” are challenged on them, “their brains reacted as if they were being chased by a bear.” On a practical level, the author also recognizes that it's not necessary to “listen to everyone until they run out of breath.” While the narrative runs out of steam toward the end, repeating points that have already been made, it offers enough valuable advice and concrete suggestions to make it worth reading, even for those who already think they know how to listen.

A valuable corrective for a talkative culture.