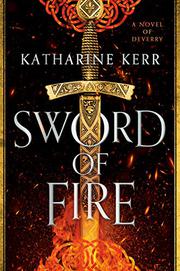 The first in a new Celtic-flavored fantasy trilogy, set a few centuries after a previous 15-book series concerning tangled fates, reincarnation, wars, and the relationships among humans, elves, dwarves, dragons, and other beings.

The land of Deverry once again faces the threat of civil war. Restive gwerbrets (Deverry’s equivalent to dukes) chafe against the rule of the Marked Prince Gwardon, who serves as regent for his ailing father, the High King. Meanwhile, the common people, aided by the bards and progressive scholars, cry out against the corrupt Deverry legal system, currently dominated by hereditary judges who tend to favor the noble and the wealthy over the principles of justice. Scholar Alyssa vairc Sirra goes on a mission to retrieve an ancient text that would provide historical precedent for elected judges, pursued by killers hired by the gwerbrets and the priests of Bel, who profit by the existing legal system. Protecting (and, naturally, developing feelings for) her along the way is Cavan, a disgraced nobleman–turned–silver dagger, a kind of mercenary soldier. But once they’ve returned with the book, they discover that their troubles are only just beginning. The book serves as a pointed rebuke to other high-fantasy series that posit that the same feudal society has existed for unchanging centuries; Deverry is evolving in a plausible and intriguing way, with its university system, controversy regarding and prejudice against increased possibilities for women, and a struggle for rights for the common people. People who haven’t read the previous 15 books (concluding with The Silver Mage in 2009) will probably be able to jump in here and enjoy the experience, but they will definitely miss various nuances, references, and cameos from several long-lived characters and their descendants that devoted fans will just love, especially those linked to Rhodry Maelwaedd, a main protagonist from the original series. The first, century-spanning series also included many incarnations of the same set of characters, and it seems likely that several of them have reincarnated appearances here as well.

Covers all the bases: a welcome return to a long-beloved world that also takes the story in a fresh direction.

DAYS OF BLOOD AND FIRE
by Katharine Kerr
Fiction

A TIME OF EXILE
by Katharine Kerr
Newsletter sign-up