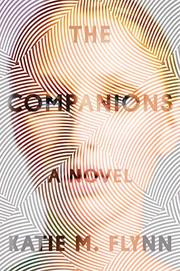 In the near future, the dead can choose to return to the world of the living—as something not quite human.

Set in a slightly futuristic, quarantined California, Flynn’s debut novel opens after a devastating virus has decimated huge swaths of people. Borders are closed, cities are highly surveilled, and death is no longer black and white. Metis, a med-tech corporation, has ownership of all companions, or machines the dying can upload their consciousness into. Companions can either be wards of their families or sold to strangers—but they are all denied basic human rights. Spanning decades and continents, the novel is told from the perspectives of eight characters (human and humanoid alike) whose lives intersect and overlap because of Lilac, a companion unlike the rest. After having been murdered as a teenager, Lilac has spent decades as a companion—one of the first, in fact. When she discovers she can defy her programming, Lilac begins to search for her murderer. From there, she comes into contact with other characters, including Cam, a former employee at an elder-care facility; Rolly, a teenager living on his family’s diminished farm; and Gabe (short for Gabrielle), a spunky yet wounded 9-year-old orphan. Flynn’s characterization is strong throughout, but Gabe is particularly well-drawn. At first, she’s angry, grief-stricken, stubborn, and unwilling to show weakness. Her emotional journey throughout the novel feels absolutely earned. In the midst of a character-driven narrative, Flynn’s simple and evocative writing shines: “It’s not supposed to be possible for a companion to dream, but I can feel it, like a lozenge on the tongue, both present and disappearing all at once.” Though the plot sometimes feels too convenient, the novel raises important questions about humanity. If companions have memories and can feel emotions like love, pain, anger, and sadness, are they not human? If not, what makes us human in the first place?

THE AGE OF MIRACLES
by Karen Thompson Walker
Fiction