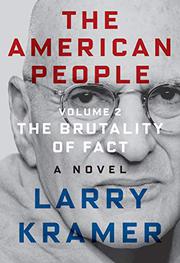 An acerbic, brilliant history of the age of AIDS spills over into a second overstuffed, antic volume.

Screenwriter, playwright, and gay activist Kramer’s sprawling novel is narrated by an omniscient “Roving Historian,” but a killing virus has an ample voice, too: Four sentences in, it says, gamely, “I, too, am glad you’ve come back to learn more about my taking over the world.” But what to call it? Learned scientists, many of them ex-Nazis, have settled on “Underlying Condition,” having rejected “Fairy Flu,” “Gay Cancer,” and “An Unidentified Fatal Male Malady,” names popular among the malevolent straights—but, even so, “UC” doesn’t please the gay population, either, “which might be thought to like the name for the very reason that others don’t.” Daniel Jerusalem will learn just how ill-willed the majority can be. At the beginning of the novel, his twin, David, is working in a gay brothel established by none other than J. Edgar Hoover in order to entrap and blackmail its clients; Daniel, meanwhile, is embarking on a medical career that will find him teasing out the virus. Early on, Daniel is smitten by a budding writer named Fred Lemish, who shares the attraction, knowing that “they both belong to a people the House of Representatives doesn’t want to see at all.” With a Joseph Heller–like satirical sweep full of goofy names and unlikely situations, Kramer examines the kinky sex lives of presidents and politicians, one in particular, Peter Ruester and his “wretched Lady Macbeth,” clearly meant to invoke the dreaded Reagans. Not far in the wings is Mordecai Masturbov, a soft-porn mogul who echoes Hugh Hefner, while down the road awaits Dereck Dumster (guess who?), another president whose judicial appointments “are filled with hatred for almost everything.” Gay and straight worlds collide, as Kramer chronicles, but never align: Though the book is a flawless exercise in black humor, it is also filled with righteous anger—and, as each page indicates, not without good reason.

Idiosyncratic, controversial, and eminently readable: a masterwork of alternative history.