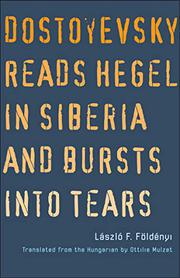 DOSTOYEVSKY READS HEGEL IN SIBERIA AND BURSTS INTO TEARS

A collection of essays on why contemporary culture would do well to embrace transcendence.

Hungarian cultural critic Földényi (Theory of Art/Univ. of Theatre, Film, and Television, Budapest; The Glance of the Medusa: The Physiognomy of Mysticism, 2018, etc.) gathers 13 pieces, published in earlier versions from 1995 to 2012, that examine the spiritual and metaphysical consequences of the Enlightenment. The author regrets the loss of mystery in contemporary life, “the feeling that there is something incomparably greater than my own self.” That sense of the ineffable, he asserts, was suppressed during the Enlightenment, which promoted the idea that “only time and intellectual preparation were required in order to cast light upon all things—with no dark corners remaining anywhere unilluminated by the light of reason.” In essays that consider a wide range of writers and artists, including Dostoyevsky, Rilke, Goethe, Artaud, William Blake, Mary Shelley, Goya, and many more, Földényi underscores the importance of the metaphysical and warns against seeing “the renunciation of transcendence as a victory.” We are surrounded by the enigma of our own existence: “Each human life,” the author writes, “emerges thanks to a fracture, a break” that plunges us from nonexistence into existence and throws us back again. In the title essay, the author imagines Dostoyevsky, exiled in Siberia, coming upon Hegel’s rationalistic philosophy of world history, which eliminated Siberia “as a setting for historical culture.” Exiled from the rest of Russia and now, by Hegel, from the progress of world history, Dostoyevsky responded at first with dismay. But gradually, he came to find new understanding—of himself, religion, and the Russian soul—far from “Hegelian repression.” Among Földényi’s essays on art, his consideration of Caspar David Friedrich’s painting Wanderer Above the Sea of Fog stands out for its precise, lyrical prose and insights about art and science. Friedrich’s painting, the author argues, reflects the contradictory longing of German romantics to become eternally submerged in nature—or to turn around and “write rapturous interpretations of the absolute spirit embodied by that sea of fog.”

THE WORLD GOES ON
by László Krasznahorkai
Fiction