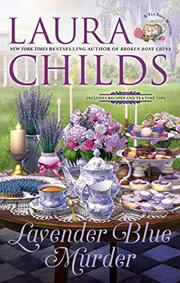 A knockoff of a British bird hunt is deadly for the Anglophile who hosts it.

Theodosia Browning, owner of the Indigo Tea Shop in the low country of South Carolina, and her friend Drayton Conneley, a tea expert, are participating in a game-bird hunt at Creekmore Plantation. Drayton, no hunter, is a friend of wealthy host Reginald Doyle, who served with him on the board of the Charleston Heritage Society. Doyle’s shot dead at the hunt, the weapon not a badly aimed shotgun but a pistol. Doyle’s wife, Meredith, knowing of Theodosia’s reputation as a sleuth (Broken Bone China, 2019, etc.), begs her to help, asking that she and Drayton stay overnight. So they’re still on hand when the house goes up in flames in what seems likely to be another staged accident. The sums of money involved guarantee plenty of suspects. Doyle had been thinking of giving the plantation to the Heritage Society, but his most recent will leaves it to his hot-tempered stepson, Alex, who’s constantly arguing with Fawn, his recent bride. Doyle was also at odds with two of his neighbors, including the Lavender Lady, whose fragrant farm borders Creekmore. Although things seem to be going well enough at the pharmaceutical company where Doyle was CEO, Theodosia learns that Guy Thorne, Doyle’s partner in a restaurant, has financial problems. When Alex’s sailboat is found drifting in the harbor, Fawn, who went out for a walk and never returned, is feared drowned. Aside from Meredith’s need for constant hand-holding, Theodosia, Drayton, and Haley, their fabulous chef, are busy with the usual activities plus a plethora of exotic-themed tea parties. The police and especially Theodosia’s detective boyfriend urge her to let them do their jobs, but she can’t break her promise to Meredith.

Genteel Southern charm and murderous mayhem mix in a mystery that keeps you guessing.

EGGS IN A CASKET
by Laura Childs
Newsletter sign-up