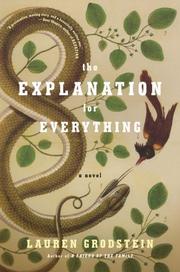 THE EXPLANATION FOR EVERYTHING

In her fourth novel, Grodstein (A Friend of the Family, 2009, etc.) writes of loss of love and belief.

Andy Waite’s a biology professor at Exton Reed, "eleven hundred students and forty-two acres of crumbling quad hidden at the ass end of New Jersey." Andy loves teaching a class entitled "There Is No God," a Darwinian homage. Andy’s mentor was a notorious Richard Dawkins–like professor, Hank Rosenblum. But Andy’s morose; his wife, Louisa, was killed by a drunken driver. He does have two precocious daughters, and tenure’s imminent, and there’s a possible National Science Foundation grant, one related to studies about alcohol and the brain. Louisa’s death explains his research, but nothing rational explains his agreement to mentor Melissa Potter’s independent study: an objectivist argument for intelligent design. Images of Louisa linger as Andy interacts with Sheila, divorced neighbor and recovering alcoholic. As his emotional relationship with Melissa skates toward intimacy, Andy is plagued by doubts—over his project’s validity after befriending Sheila; over his unbending opposition to parole for the young driver who killed Louisa; and over his rigidity as Melissa’s warmth and generosity make real the power of spiritual belief. Rather than offering the works of St. Augustine or C.S. Lewis as rationalizations for belief, Grodstein offers the homilies of a fictional local pastor; it's a bit of an easier road, but her narrative sparkles with irony and wry observation. A fundamentalist student, Andy’s vocal opponent, loses his faith. Rosenblum’s overbearing prodding of a brilliant student who rejects science for marriage to a pastor results in her suicide. As the possibility of the divine sparks emotions Andy cannot comprehend, he learns he’s caught up in another person’s experiment. A college professor, Grodstein is perfect with her description of campus tremors radiating after a colleague strays from conventional wisdom. While Melissa’s motivations and actions are sometimes contradictory and counterintuitive, Grodstein’s portrait of Andy is spot-on, as is that of the evangelical student, Sheila, Rosenblum and the minor characters.

A rumination on love and loss, faith in reason and faith in the divine.

THE LAST SUMMER OF THE CAMPERDOWNS
by Elizabeth Kelly
Fiction

THE EXPLANATION FOR EVERYTHING
by Lauren Grodstein
Fiction

A FRIEND OF THE FAMILY
by Lauren Grodstein
Fiction

REPRODUCTION IS THE FLAW OF LOVE
by Lauren Grodstein
Fiction

THE BEST OF ANIMALS
by Lauren Grodstein

THE ADULTS
by Alison Espach
Fiction

FROM DUST TO DNA
by RJ Hogarth
Fiction