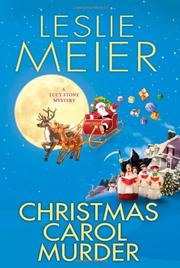 A couple of Scrooges threaten to wreck the fragile economy of Tinker’s Cove.

At Downeast Mortgage, business is business. While Seamen’s Bank renegotiates loans with homeowners who find themselves under water, Downeast pushes foreclosure. That’s how Harbormaster Harry Crawford loses the last hundred acres of his family’s waterfront farm. And how Assistant Building Inspector Phil Watkins loses his LEED-certified green home. And how Lexie and Zach Cunningham, who spend their mortgage money to buy medical coverage for their critically ill daughter, Angie, lose their modest ranch house. Soon, foreclosed properties outnumber occupied ones. So it’s no surprise when a package bomb takes out miserly old Jake Marlowe, one of Downeast’s two owners. Lucy Stone (Easter Bunny Murder, 2013, etc.), ace reporter for the Pennysaver, must take time from practicing for her role as Mrs. Cratchit in her friend Rachel’s production of A Christmas Carol to try to solve the case before Marlowe’s partner, Ben Scribner, follows Jake into the great overdraft in the sky. Though there’s no dearth of suspects, Lucy focuses on Seth Lesinski, a Che Guevara look-alike who beguiles Lucy’s daughter Sara into ditching her college classes to protest Downeast’s policies. Will Lucy crack the case before Scribner turns Tinker’s Cove into a ghost town whose presiding spirit is Marlowe’s ghost?

Meier, queen of WASP mayhem, ends by showing mercy to all her characters, even outside agitators with foreign-sounding last names. God bless us, every one.

GEM OF A GHOST
by Sue Ann Jaffarian
Mystery