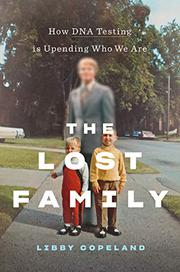 How DNA Testing Is Upending Who We Are
by Libby Copeland
BUY NOW FROM
AMAZON
BARNES & NOBLE
LOCAL BOOKSELLER
GET WEEKLY BOOK RECOMMENDATIONS:

A fascinating account of consumer genetic testing’s “fundamental reshaping of the American family” over the past two decades.

Swabbing your cheek and sending off for personal DNA results is increasingly common, for the curious as well as for family historians and those in the dark about their parentage. In her impeccably researched debut, journalist Copeland traces the development of “genetic genealogy,” a field created by citizen scientists. Whereas 1970s genealogists relied on microfilm archives and in-person interviews with relatives, their yearslong searches only shortened by lucky discoveries, today’s genetic “seekers” can get answers within days. In 2000, FamilyTreeDNA became the first company to offer at-home DNA testing, followed by Ancestry.com and 23andMe. The author chronicles her meeting with the founder of FamilyTreeDNA, her visit to the Family History Library in Salt Lake City, and her correspondence with 400 DNA testers. Many received shocking results but agree it’s better to know the truth, even about abandonment, rape, or incest. Copeland highlights a few representative cases—e.g., a father who had a second family and a woman who didn’t learn she was adopted until age 51. Foundlings and children of sperm donors often meet (half-)siblings they never knew existed. But the anchoring storyline is that of Alice Collins Plebuch, who was surprised when her saliva sample indicated that she was half Eastern European Jewish instead of 100% British/Irish. Copeland presents her quest for her late father’s true heritage as a riveting mystery with as many false leads as any crime novel. Along the way, the author thoughtfully probes the ethical dangers of genetic testing, including conflicting privacy rights, an essentialist view of race, unexpected medical results, and DNA databases being used in crime-solving. As she notes, it’s a fast-moving field in need of regulation, and she engrossingly examines the many questions that arise, both practical and rhetorical: “What makes us who we are? Blood? Family? Culture?”

Up-to-the-minute science meets the philosophy of identity in a poignant, engaging debut book.