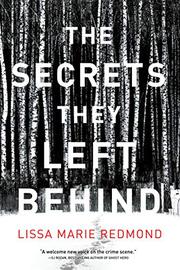 THE SECRETS THEY LEFT BEHIND

A Buffalo cop who’s gone undercover for the FBI finds herself in a world of hurt.

Shea O’Connor is 23 but looks 18. That’s why the FBI used her to pose as a high school student to catch a serial killer, a case that left her scarred both physically and emotionally. The case is still under a gag order and Shea is back on boring patrol duty when FBI Agent Bill Walters asks her to work another case for him. Three freshmen college friends all went missing the same night in the little town of Kelly’s Falls, New York. Against her better judgment, Shea accepts and is set up as Shea Anderson, a transfer to Harris Community College whose parents were killed in a car accident and whose uncle is the town police chief, Roy Bishop. Since her fake uncle is youngish, unmarried, and unhappy she's interfering in his case, she’s put up in a boardinghouse. Emma Lansing and Olivia Stansfield, two of the missing girls, came from a nice area; the wilder Skyler Santana lived in a trailer park with her alcoholic mother while her drug-dealing boyfriend, Joe Styles, worked on a GED at Harris. Shea immediately becomes friends with the missing girls’ buds, Kayla, Jenna, and Maddie. She fends off passes from Joe while recognizing his bad-boy appeal to young girls. Shea has no trouble fitting in and easily gains her new friends’ confidence. But she still suspects that they’re hiding information that could be the key to breaking the case. Even worse, she and Nick Stansfield, the brother who refuses to go back to RIT until Olivia’s found, fall for each other, and she hates herself for deceiving him. Redmond (A Means to an End, 2019, etc.) shows tensions mounting as Shea struggles for answers along with a town united in its resolve to find the missing girls.

A page-turner whose puzzling mystery and psychological drama are rooted in plausible descriptions of teenage angst.