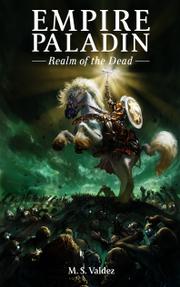 Realm of the Dead
by M. S. Valdez
BUY NOW FROM
AMAZON
GET WEEKLY BOOK RECOMMENDATIONS:

A debut historical fantasy that pits God against the devil, and their magic-users against one another.

In the year 1241, paladins—special warriors with magical abilities in service of the Christian church—are sent out into the world to enact God’s will and uphold his laws. Lord Vhaldrynn Malleus, one of the 12 strongest and high-ranking “primus” paladins, is using his healing powers on a battlefield when he’s informed that his own city has been mysteriously attacked by nearby armies. Vhaldrynn rushes back to his home, only to find a smoking ruin where his house once stood, and the burned corpses of his family. In his grief, he denounces God and his role as a paladin, and vows to get revenge. After promising to destroy the world in his rage, Vhaldrynn meets a mysterious stranger in the forest, whose evil identity quickly becomes apparent. While listening to the whispers of Lucifer, Vhaldrynn learns that his paladin powers didn’t abandon him when he denounced his faith, but are actually stronger than ever—and include the ability to raise an army of the dead. Now he can destroy anyone and anything that dares defy him. It ultimately falls to paladin Lady Camila Chastaine and her two companions to bring peace back to the world. Over the course of this violent fantasy tale, Valdez effectively keeps the action moving along. It’s steeped in religious lore throughout, and there is a complex hierarchy of paladins and church officials—which, as a result, means that there are a fair number of character names for readers to learn. Even so, the novel is a relatively short length for the genre—fewer than 200 pages. Still, despite its brevity, the author does a fair job of organically bringing each player onto the stage, rather than bogging the reader down with unnecessary exposition and wordy introductions.

A religious historical fantasy that focuses on an ultimate battle between good and evil.