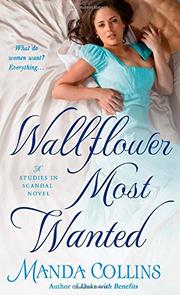 A lady artist falls off a cliff and then falls in love.

A few young women in the town of Little Seaford have thrown themselves at the vicar, Lord Benedick Lisle, but when Miss Sophia Hastings tumbles off a cliff in front of him, she’s the first to be so literal about it. Even with the pain of a sprained ankle, she notices his “almost too fittingly angelic” face, and Ben doubts that “the Archbishop of Canterbury himself would be able to resist” her charms, so when he scoops her up to carry her home, it should be the start of a simple love story. Unfortunately, their easy chemistry is disrupted by a conversation they overhear after her fall, between two men plotting to take another’s life, which Sophia insists on investigating despite her injury. Ben agrees to assist, and it’s not long before they uncover several village secrets, including an art forgery scheme. A talented painter, Sophia has an artistic spirit that wins over Benedick despite his belief that a vicar needs a more grounded wife, and though her devotion to solving the mystery is powerful, just a few chapters into the book, there's no mystery about whether they'll end up together. Sophia is the third of the Beauchamp heiresses to find a love match in Collins’ Studies in Scandal series and also the third to find herself in grave danger. Sophia and Ben’s investigation takes nearly the entire book, and as their sleuthing gives the pair many opportunities to be alone, they steal many passionate moments that would tempt even a less holy man. These scenes, and the continued development of the close relationship among the four bluestocking heiresses, provide many high notes in another concentrated and intelligent story from Collins.

A heart-stopping Regency celebrating a genius and the man who can’t resist her.

ONE FOR THE ROGUE
by Manda Collins
Fiction

DUKE WITH BENEFITS
by Manda Collins

THE BRIDE TAKES A GROOM
by Lisa Berne
Fiction

ONE FOR THE ROGUE
by Manda Collins
Fiction

THE TEMPTING OF THOMAS CARRICK
by Stephanie Laurens
Fiction

DO YOU WANT TO START A SCANDAL
by Tessa Dare
Fiction

TEMPTATIONS OF A WALLFLOWER
by Eva Leigh
Newsletter sign-up