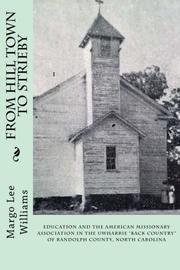 FROM HILL TOWN TO STRIEBY

A meticulous history of a predominantly African-American town in the American South.

Hill Town, later called Strieby, grew largely out of the antebellum settlement of two families: the Hills and the Lassiters. Edward “Ned” Hill and his wife, Priscilla Mahockly were the founding couple. She was a former slave, and he may have been born a free man but maintained a relationship of some kind with a white family, the Hills. A rural town in central North Carolina, Strieby is of particular historical interest because its existence predates the abolition of slavery and experienced the benefits that followed emancipation. Not only could free African-Americans choose where to live in Strieby, they could also pursue an education. One native of the greater Randolph country took those hard-won gains so seriously, he devoted his life to their fulfillment; the Reverend Alfred Islay Walden, born an illiterate slave, left the area in 1867 to pursue an education, graduated from Howard University and the New Brunswick Theological Seminary, and eventually became a minister, teacher, and accomplished poet. He returned in 1879, founded a church, helped establish a post office, and also started a school with the help of the American Missionary Association, a coalition that brought scholastic knowledge from the North to newly free Southern communities. Williams (Miles Lassiter, 2011) also chronicles the struggles with racism that still persisted during the post–Civil War years. The author’s investigative research is nothing short of astonishing—the book is an encyclopedic fount of information. Not all of the material will capture the interest of a broad audience—a considerable portion of the book catalogs generations of genealogical connections in meticulous detail. However, the principal focus of the study—the town’s historical commitment to education—is of universal appeal, and Williams offers thoughtful commentary on its development. Furthermore, the book brims with old back-and-white photographs that help capture the historical moment.

A breathtakingly thorough exploration of a historically significant town.

MILES TO GO FOR FREEDOM
by Linda Barrett Osborne
Nonfiction