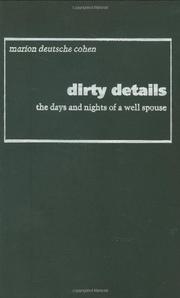 The Days and Nights of a Well Spouse
by Marion Deutsche Cohen
BUY NOW FROM
AMAZON
BARNES & NOBLE
GET WEEKLY BOOK RECOMMENDATIONS:

 A resentful, angry woman shares her feelings about the sheer awfulness of taking care of a severely disabled husband. Cohen, a profesor of mathematics at Temple University, describes the years from 1977, when her husband, a physicist, was diagnosed with multiple sclerosis, to mid-1988, when he could no longer transfer himself to and from a wheelchair, as a period of stress; ``dire straits'' is the term she uses for the next six years, during which she cared for him at home. Her ordeal, but not his, ended with his placement in a nursing home. A believer in speaking one's mind, she let those around her know loudly, clearly, and frequently how she felt about being in a situation she could not abide. Most of her anger is directed at what she calls the conspiracy of silence among doctors, social workers, and therapists who know but do not acknowledge the burdens of the care-providing spouse, but there's plenty left for the friends and relatives who she felt did not help enough. For Cohen, being the care-giving spouse can be summed up in three words--nights, lifting, and toilet--and she elaborates fully on what these involve. By writing all the dirty details, she hopes to keep herself from ever forgetting what it was like, as well as to convince society that changes in home health care must be made. The latter may be too much to hope for. Although one might want to feel sympathy for someone in Cohen's situation, her temper and sarcasm, combined with her total commitment to self-expression (``It's not my job to hide what I'm feeling'') make it difficult to feel much compassion for this particular woman. Twenty-four black-and-white photographs provide stark documentation of the Cohen family's ordeal. A bitter and ugly little book.