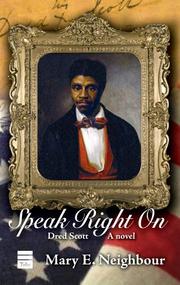 Lincoln told Harriet Beecher Stowe that she started the Civil War, but Dred Scott, subject of this debut historical novel, has the stronger claim.

From the few facts known about the slave who sued for his freedom in the case that bears his name, Neighbour imagines a lengthy biography. Born around 1800, Scott moved with his owner from Virginia to Alabama and Missouri. In St. Louis, he became the property of a physician who inadvertently gave Scott grounds for his suit by taking him into free territories. In 1846, relying on the principle of “once free, always free,” Scott began a legal battle that ended in 1857 with the U.S. Supreme Court decision against him that angered Lincoln, overturned the Missouri Compromise and opened up the west to slavery. Neighbour lavishes most of her invention on Scott’s early life—his beloved Gran, her tales of Africa, plantation horrors, a relatively generous owner—rather than the years and complexities of his case. But while attempting to individualize Scott in first-person narration, Neighbour unfortunately falls back on familiar Stowe-like stories of the Old South, leaving the unique issues Scott dramatized to several late third-person, stagey chapters. Were Neighbour a more skilled writer, the book might have artfully integrated the personal and the legal, Scott’s presumed emotional life and his documented influence on American emotions.

Unfailingly sympathetic to her subject, consistently generous to the white characters she creates, Neighbour is more popular hagiographer than literary novelist.