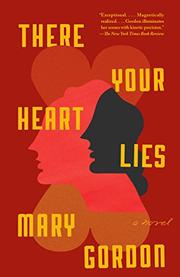 THERE YOUR HEART LIES

Shifting points in time and points of view reveal a young woman shaped by the zealotry that can emanate from family, faith, or war.

In the late 1930s, Marian Taylor breaks with her wealthy New York family after their righteous Roman Catholic persecution forces her beloved gay brother to hang himself. She sails off to Spain with his lover, Russell, a medical doctor she has married for mutual convenience, to join the forces fighting Franco by caring for the wounded. She is 19 and uncommonly naïve, prey to “the vague ideas of a privileged girl,” while her new friends, who are fiercely debating fascism and communism, “are the most wonderful people in the world.” Gordon (The Liar’s Wife, 2014, etc.) writes from within the character’s fledgling sensibility to provide a baseline for innocence soon to be broken, as is the narrative. The chapters on Spain alternate with others in which Marian is 92 and living on Rhode Island’s coast with her granddaughter, Amelia. Back in Spain, Marian loses Russell as he flees the war’s horrors and returns to the U.S. She marries a Spanish doctor and soon loses him to sepsis. She has their baby and loses him to her domineering mother-in-law. Gordon touches often on the sadism of soldiers, clerics, and citizens under Franco, encapsulating it in a devastated priest, Father Tomas, emerging from a confessional after three hours of listening to—and perforce absolving—penitents and their litanies of cruelty. The narrative lightens considerably with the shifts to older Marian in 2009 as she gives Amelia an elderly woman’s perspective on that terrible time in Spain—before Gordon sends the younger woman off on her own little crusade, a nice parallel without much point.

An emotionally and historically rich work with a strong character portrait holding together its disparate parts.

THE LOVE OF MY YOUTH
by Mary Gordon
Nonfiction

THE STORIES OF MARY GORDON
by Mary Gordon
Fiction

JOAN OF ARC
by Mary Gordon

I SAW HER THAT NIGHT
by Drago Jancar
Fiction

CRIMES OF THE FATHER
by Thomas Keneally
Fiction

WE ARE NOT OURSELVES
by Matthew Thomas
Fiction

A CONSTELLATION OF VITAL PHENOMENA
by Anthony Marra
Newsletter sign-up