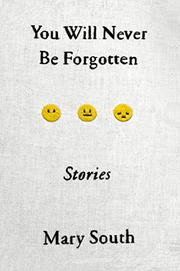 YOU WILL NEVER BE FORGOTTEN

Futuristic and of-the-moment stories that take aim at innovations that threaten to take us backward.

In this debut collection, South crafts science-fictional scenarios that are just believable enough to be unsettling: In "Keith Prime," babies, born from artificial wombs, are drugged into "perpetual sleep," tended by nurses, and then harvested for valuable organs; and in "Not Setsuko," a mother who has lost her daughter seeks to "duplicate" her in a new one. To do this, she obsessively restages important moments from her dead daughter's life (like the death of the beloved family cat) and, failing that, makes the new Setsuko recite memories from experiences she's never had (like breaking her arm). Throughout, the characters are desperately unhappy and disconnected. Sometimes their coping mechanisms are so extreme it's hard to care, as in "The Promised Hostel," a meandering story that revolves around a group of damaged men suckling at the breasts of a damaged woman. But in the standout pieces, the characters' pain is deeply human and affecting. "Frequently Asked Questions About Your Craniotomy," an FAQ that goes off the rails, reveals that none of us is immune to loss, not even an accomplished neurosurgeon who opens skulls and faces death on a daily basis. And in "You Will Never Be Forgotten," a scathing critique of Silicon Valley and everything the internet has borne, the narrator is a content moderator at a popular search engine, which means she sits in a dark room all day reviewing "hate speech, gore, torture, pornography both adult and child, horrific traffic accidents, executions carried out by terrorists" and removing it. She has also recently been raped by a well-known venture capitalist. This story takes many brilliant twists and turns and culminates in an ending so surprising and inevitable Flannery O'Connor would surely approve.