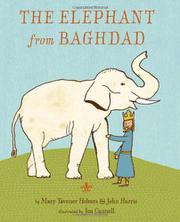 THE ELEPHANT FROM BAGHDAD

Holmes, Harris and Cannel (A Giraffe Goes to Paris, 2010) again team up to tell a tale about a large exotic animal who historically ventured into European/Western territory.

This time they reach back into the first millennium to look at a cross-cultural bridge constructed in the 9th century, when Charlemagne was emperor of most of Europe. The first-person narrative in the voice of the chronicling monk of St. Gall, Notker the Stammerer, tells how the emperor was interested in Harun al-Rashid, the famed caliph of Baghdad. Charlemagne dispatches some of his men to travel to Baghdad to meet with Harun. Charlemagne’s emissaries to Harun’s beautiful city are treated with interest and respect, introduced to “artists, musicians, scholars, mathematicians, architects, and poets” and sent home with extraordinary gifts. These include a wondrous mechanical clock, multiple treasures and an albino elephant named Abu and his Jewish caretaker, Isaac. They journey westward, following the same route across the Alps taken by Hannibal 500 years earlier. Cannel’s ink-and-watercolor illustration is endearingly old-fashioned: simple, whimsical and sophisticated at the same time, reminiscent of Virginia Kahl and Laurent de Brunhoff in its expressive cartoon lines and lively scenes. An authors’ note provides more information on the historical Notker the Stammerer and the famous clock, as well as providing sources for their story.

Captivating and charming both as animal story and as a glimpse of historical East/West relations. (Picture book. 4-10)

A GIRAFFE GOES TO PARIS
by Mary Tavener Holmes
Children

MY TRAVELS WITH CLARA
by Mary Tavener Holmes

THE WORST NIGHT EVER
by Dave Barry
Children

A GIRAFFE GOES TO PARIS
by Mary Tavener Holmes
Children

MY TRAVELS WITH CLARA
by Mary Tavener Holmes
Children

THE KID WHO NAMED PLUTO
by Marc McCutcheon

THE AMAZING TRAVELS OF IBN BATTUTA
by Fatima Sharafeddine
Children