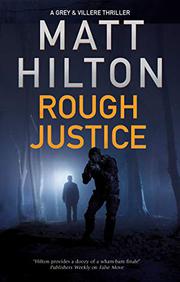 In their sixth adventure, Portland private eyes Tess Grey and Nicolas "Po" Villere (False Move, 2019, etc.) head to upstate Maine to investigate a rumor about the recent crash of a small aircraft and find that the woods are alive with killers.

Field biologists Jonathan Laird and Elsa Carmichael, who heard the Cessna 172 Skyhawk come down half a mile from their camp in Aroostook County, agree that both the pilot and co-pilot were killed, but Grant McNeill, the undergrad student assisting them, let something slip about a female survivor, and Emma Clancy, who works with the Portland DA’s Office, has dispatched Tess and Po to see if there’s any truth to that story. And of course there is. Drug Enforcement Administration agent Alicia Coleman, who’d succeeded in infiltrating an international narcotics smuggling crew, has walked away from an accident that should have killed her and has rescued a bag full of evidence as well. As Tess and Po, joined by their unlikely friend Jerome "Pinky" Leclerc, a Cajun dealer of illegal arms who did time in Louisiana before he saw the light, search for the biologists so that they can ask them the obvious question and then judge whether they’re lying, the rumor that Alicia is still alive has attracted the attention of the very criminals she was intent in bringing down, and they’ve dispatched a team of five assassins headed by dead-eyed Virginia Locke, another DEA agent who’s left the straight and narrow for real. Hilton, not one to shy away from violent complications, sets yet another hired murderer and his amateurish cousin on the trail of Pinky just to keep things interesting. After a shootout halfway through the story reduces the numbers on both sides, Locke calls for reinforcements, and half a dozen nameless new killers show up to take down the good guys just as they’re limping toward Brayton Lake, where the assassins have taken the entire town hostage. Guess what happens next.