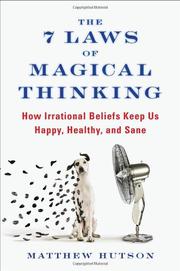 THE 7 LAWS OF MAGICAL THINKING

Poor dumb humans. We cling to sentimental objects such as wedding rings, think we can beat the odds at Vegas and believe in justice and the karmic rule that what goes around comes around. Well, writes former Psychology Today news editor Hutson, that’s the way we’re wired, so just “chillax.” There’s nothing new in the observation that human thought is shot through with irrationality, that we tend to invest objects with magical properties, or that we harbor unreasonable beliefs. But what does it tell us about ourselves that companies can make a pretty penny selling packets of soil from Jerusalem? That we’re a superstitious people, as superstitious as our forebears, who bought and sold holy relics for ages. And that we believe that actions have distant consequences? That’s not quite so silly, given what we know of chaos theory, difficult science that evades analysis here. There is danger, of course, in thinking too symbolically, as Hutson notes; we have only to consider the figure of Don Quixote, who is himself a walking symbol. But how many of us live the life of Walter Mitty? There’s some utility in the author’s underlying program of skepticism, considering the flim-flam artists who work the fringes of the paranormal and New Age worlds, but it’s not quite satisfactory to adduce the “law of truly large numbers” to explain the simple fact that there’s a sucker born every minute. Given that no one can really escape from thinking magically, this book really should be called simply The 7 Laws of Thinking.

No competition against meatier books on the mind from the likes of Sacks, Damasio, Hofstadter, Ariely and others.