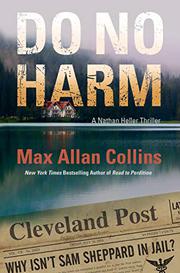 Did the handsome osteopath and police doctor from suburban Ohio really kill his wife, Marilyn, in their bedroom while she was pregnant with their second child? Bay Village mayor Marsh Dodge, Cuyahoga County coroner Dr. Samuel Gerber, and Cleveland Press editor Louis Seltzer all think so, and county prosecutor Frank Cullitan has persuaded 12 jurors to agree. Three years after the 1954 murder, though, Erle Stanley Gardner, the creator of both the fictional Perry Mason and the real-life Court of Last Resort, wants Nate’s A-1 Detective Agency to review the evidence. Nate’s job isn’t to exonerate Sheppard: “I’m just an unbiased investigator making sure justice was done,” he assures Gerber. His inquiries, notable for their noncommittal thoroughness in scattering suspicion, end when a Florida inmate confesses to the murder, raising reasonable doubt for Nate and Gardner but not for the county, which refuses to reopen the case. So Sheppard continues to languish in prison, garnering a new German fiancee, until 1966, when his new defense attorney, F. Lee Bailey (one of the very few characters here to appear under his own name), engages Nate once more to review the evidence in search of new leads and ultimately succeeds in getting his conviction thrown out and a new trial ordered. Readers who peek ahead to the closing note by Collins (Girl Can’t Help It, 2020, etc.), which acknowledges that “I changed my mind about the identity of the killer or killers half a dozen times during the research for this novel,” will know better than to expect a definitive, or even a definitive-sounding, solution.

A sober, bracing time machine, more fiction than history, that ends on an authentically inconclusive note.

SCARFACE AND THE UNTOUCHABLE
by Max Allan Collins
Mystery

QUARRY IN THE BLACK
by Max Allan Collins
Newsletter sign-up