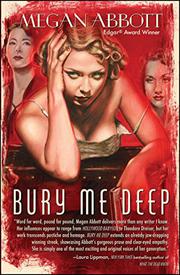 Dr. Everett Seeley should never have left Marion alone. After losing his medical license due to his morphine habit, the good doctor took a job in Mexico and assumed his young bride was too fragile to follow. Instead, as this fast and furious noir opens, he sets her up in a tiny Phoenix apartment with a job in a private clinic, where she is soon taken under the wing of Louise, a tough but caring nurse, and Louise’s giddy roommate, the tubercular Ginny. At first, their companionship is comforting and their wild parties fun. But before long Marion falls hard for one of their regular male visitors, the wealthy Joe Lanigan. Drink and a peroxide bob lead to cocaine and sexual degradation, ultimately ending in murder. But where Lanigan and Everett saw the delicate-looking young woman as a fragile doll, Marion finds in herself an inner resilience that might just help her survive. Working once more (as in The Song is You, 2007) from a true crime, the infamous Brighton Trunk Murders of 1934, Edgar-winner Abbott brings the era to life, inhabiting the “bright-eyed and twitchy-tailed” party girls in all their enthusiasm and desperation. Her nearly stream-of-consciousness narration is direct and powerful, straight from Marion’s addled and passionate brain. As such, it is full of repeated phrases: “It was like a saber lain before. It was a saber, a gauntlet, somehow.” But for all the classic-noir simplicity, such as the use of repetition rather than elaboration for emphasis, her prose carries an urgency that brings hard-boiled crime fiction kicking and screaming into the modern age.

Abbott takes readers on a wild thrill ride with an utterly believable and strangely sympathetic heroine.

THE SONG IS YOU
by Megan Abbott
Fiction

THE END OF EVERYTHING
by Megan Abbott
Fiction

GIVE ME YOUR HAND
by Megan Abbott
Fiction

YOU WILL KNOW ME
by Megan Abbott
Fiction

THE FEVER
by Megan Abbott
Fiction

DARE ME
by Megan Abbott
Fiction

THE END OF EVERYTHING
by Megan Abbott
Fiction