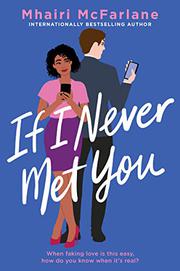 IF I NEVER MET YOU

A jilted British attorney gets more than she bargained for when she agrees to a fauxmance with the office playboy.

Laurie Watkinson has a corporate law job she loves, dear friends, and Dan, her dependable live-in boyfriend who works in the same firm. When Dan sits her down one evening, Laurie expects anything but to hear him say he's moving out; and then to hear soon after that he has a new girlfriend. Hoping for a bit of revenge, newly single Laurie agrees to pose as “Phony Goddess” to “Greek God” Jamie Carter, her new colleague and a known “soulless womanizer.” Jamie is gorgeous and charming but needs to appear settled to secure a promotion, and he thinks earning the affection of Laurie, the firm’s “golden girl,” is the surest route. Jamie and Laurie are attracted to one another, make each other laugh, and, they learn, have childhood trauma in common. Jamie is a classic playboy felled by love who’s written endearingly and convincingly: “I scoffed at the idea anyone could make you see your life through new eyes and I’m so, so glad to be wrong.” Laurie’s intelligence and acerbic wit—especially as they relate to navigating English society as a woman of color—are strengths that can obscure uncomfortable feelings. Thanks to a selfish, absentee father, an unconventional mother, and, she now realizes, a partner who never encouraged her to grow as a person, Laurie puts her own desires last. Giving the novel an expanded palette beyond the romance, Laurie’s friendship with Jamie is just one of several changes in behavior and attitude that help her to regain a sense of her own agency and importance. McFarlane’s gift is writing romantic comedy that depicts a recognizable world—in this case, the culturally diverse world of young professionals in Manchester, England—without dimming the luster of shining moments of humor, love, and connection.