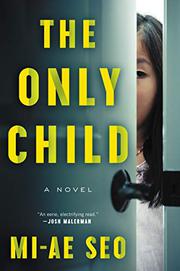 In Seoul, Seonkyeong, an FBI–trained criminal-psychology teacher, is surprised when she’s granted an interview with the serial killer Yi Byeongdo, who has refused to speak to anyone else. Meanwhile, her workaholic husband, Jaeseong, has reluctantly taken custody of his daughter, who had been living with her maternal grandparents ever since his ex-wife’s death, when his in-laws die in a mysterious fire. Seonkyeong immediately welcomes the child as part of the family, but something about her is off. She’s cold to Seonkyeong one minute and throwing violent tantrums the next. But her behavior is hard to correct, as she transforms into a much more obedient child when her father is home. As Seonkyeong gets to know both the killer and the child, she sees disturbing similarities between the two. Yi Byeongdo is handsome but brutal. His violent tendencies began in childhood when his mother rejected him; he shares the details in intermittent chapters. Hayeong, though outwardly angelic, was often her mother’s pawn in a ruthless game to get back at Jaeseong for having left them. Between the two of them, Hayeong is the creepiest. As she fights Seonkyeong for control of the house, she ticks off all the childhood characteristics of a future serial killer, notably her cruelty to animals. Even more disturbing is the way she gives her stepmother false hope that she, unlike Yi Byeongdo, is young enough to be saved. Both of Seonkyeong’s charges have affection for her, but it’s not to be mistaken for trust.

With cold precision, Seo creates a chilling and engrossing profile of a next-generation serial killer.