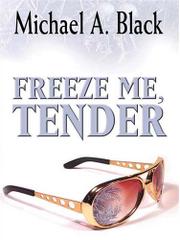 Another Elvis sighting, only this time he’s called Colton Purcell.

The fact that the King of Rock, Colton Purcell, has been dead for ten years, and waiting in a stainless-steel cylinder full of liquid nitrogen for medical science to thaw him out, doesn’t deter hundreds from gathering to pay homage to him at the annual Las Vegas Colton Impersonation Contest. This year’s attendees include Gabe, who may be the King’s illegitimate son; Willard, who may be the King’s twin brother, recently sprung from a Memphis cuckoo farm by his nurse Margaret; Ladonna, the King’s ex and their bratty kid Melissa Michelle; Pablo, the Prince of Pop whose Mexican marriage to Melissa was annulled; and enough wise guys to make the gaming commission nervous. Broken necks keep the King’s former manager Big Daddy Babcock and Vegas investigative reporter Buzzy Sawyer from attending. The deaths concern the legal title to the King’s billions—a complicated tale encrypted in Buzzy’s computer, which his newspaper pal Harry Bauer, newly divorced and newly sober, tried to hack into. Eventually, rival goons load everybody into vans for a one-way ride, during which Harry becomes a hero and a timely undercover Fed pops up.

Veteran police officer Black (Windy City Knights, 2004, etc.) is torn between glitz and noir, with a side of schmaltz. Okay for reading on a junket to Vegas . . . and leaving on the plane, finished or not.

MORE BY MICHAEL A. BLACK

CHIMES AT MIDNIGHT
by Michael A. Black
Mystery

A FINAL JUDGMENT
by Michael A. Black
Fiction

A KILLING FROST
by Michael A. Black
Newsletter sign-up