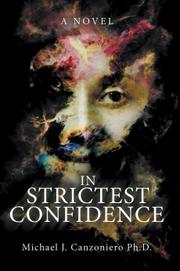 A Long Island, New York–based homicide detective searches for a killer who may be his therapist friend’s patient in Canzoniero’s (Conditional Love, 2015) thriller.

In 1991, DS William Hael’s newest case promises to be grueling: retired teacher Armand Esposito’s mutilated body is found nailed to a wall, akin to a crucifixion. Hael has been tormented since the deaths of his wife, Kathy, and 8-year-old son, Billy, in an accident; he feels that he could have been a better husband and father. He’d previously seen psychologist Dr. Michael Franz for help in raising Billy, who displayed symptoms of ADHD. As it happens, Franz may also have the key to solving the Esposito murder. Three people have been occupying the doctor’s mind lately: emotionally disturbed former patient David Ulster and current patients Jack Rose, a psychopath, and Dolores Witowski, who suffers from multiple-personality disorder. One of them is connected to the recent killing, but although Franz can describe the patient’s demeanor and history to Hael, he can’t divulge his or her name. The detective finds that he can relate, in one way, to the three suspects; like him, they endured childhoods with abusive, alcoholic fathers. But as he investigates, it turns out that time is not on his side: the killer has targeted Franz, and Hael himself could be next. Canzoniero dives deep into what goes into the psychological makeup of a murderer, and his characters are suitably complex. Their environments often symbolize their internal agonies; David’s family home, for example, has “multi-colored floral wallpaper” that’s badly peeling. The story is a whodunit, with some parts following the unnamed killer’s actions. Most readers will likely guess the culprit. Nevertheless, the author effectively augments the mystery by having Hael link Esposito’s murder to a similar death two years earlier—and a second murder in the present day.

My Dead Friend Sarah: A Novel
by Peter Rosch
Fiction