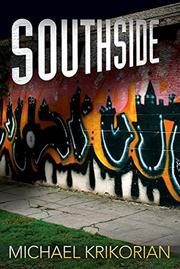 Michael Lyons covers the gang beat at the Los Angeles Times and has spent the past few years interviewing gang members, opposing gangs, their relatives and the families of their victims. Somewhere along the way, Lyons apparently stepped on someone’s toes, and the reporter ends up with two shots to the torso, bleeding out on a sidewalk in LA. Soon, police have their hands full trying to solve the attempted murder of the well-known reporter who could have been the target of any number of gang members. But the list narrows after a while, and a man known to the gang world as “Big Evil” becomes the focus of the investigation. At least, that’s the case until a tape surfaces of Lyons talking about how the act of being shot in the torso would give him a lot of “street cred.” The police, convinced that Lyons engineered his own hit, put less emphasis on the investigation, and he’s fired from the Times; even his own girlfriend, a beautiful and famous chef, deserts him. So Lyons decides to find out who did it himself, and this takes him even deeper into gang territory. In this thinly disguised roman à clef, the main character is indistinguishable from the author, who includes many of his narrowly fictionalized associates in the book. Although the tale showcases Krikorian’s deep knowledge of the street gangs that dominate LA’s underworld, the author relies strictly on slang and gang parlance to flavor the book, rarely explaining the significance of the gang members’ language or actions.

A reader who doesn’t mind wading through the often indecipherable street patois might find this book hits the spot, but for most, it won’t be enough to balance out the ragged plot and undeveloped characters that plague this maiden effort.

JUMPED IN
by Jorja Leap
Indie