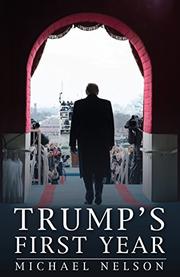 This academic publication from the publisher’s First Year Project won’t generate the bombshell headlines of more sensationalist and gossipy books, but it provides context and balance for its conclusions, ones that are consistently at odds with Trump’s own assessment of his performance.

Nelson (Political Science/Rhodes Coll.; Resilient America: Electing Nixon, Channeling Dissent, and Dividing Government, 2014, etc.) compares Trump’s first year with the first years of other presidents, generally better versed in the ways of governing, and he concludes that “the most powerful office in the world is not an entry-level government job.” The author shows how the electorate was primed to support the celebrity outsider, seeing his lack of experience and connections as strengths rather than weaknesses. He also shows how the president’s lack of support within government circles, even within his own party, left him bereft when it came time to fill his Cabinet and make other crucial appointments and how his unpredictable temperament left him particularly unsuited for establishing policy. Instead, he “wasted much of the ten-week transition period, tossing aside the months of planning and research his team had done.” He frequently found himself making appointments to replace other appointments he had made, relying heavily on his vice president for recommendations because there were so few he knew and trusted that had the necessary experience. He vowed to stop tweeting once the candidate became president, and then continued anyway. He criticized his predecessor for overuse of the executive order and then issued a slew of them. His polarizing campaign never transitioned to unity once he became elected. “He displayed virtually no knowledge of history,” writes the author, and no understanding of the separation of power among branches of government or how to build coalitions to govern effectively. Most presidents improve at the job once they gain experience with it, but this analysis sees little reason for hope.

A concise and dispassionate analysis of the controversial president’s performance over the year since his unexpected election win.

WHAT HAPPENED
by Hillary Clinton
Nonfiction